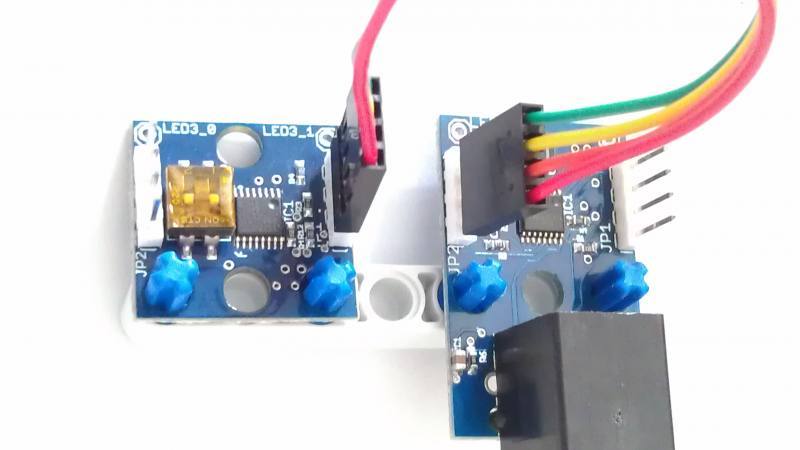 Bright RGB LED set for the LEGO MINDSTORMS NXT and EV3, EV3 Ready. Набор из 3 светодиодных модулей для LEGO Mindstorms NXT и EV3 Арт.: 128-74-04 16 million colors, user programmable. Optional blinking mode, user programmable. Daisy chain up to 4 LEDs on one port. Program lights individually or as a group. Detailed Description Give your NXT a bright future with the dLight. The dLight is a bright all-color LED that can be controlled by your NXT. A dLight is capable of producing 16 million different colors that can be continuously on or blink in various patterns. Up to four dLights can be daisy chained on a single sensor port and still be controlled individually. The dLight can be used to add color and light to your robots! Ambulances that flash, eyes that glow, and alerts for your robots can all be made with the dLight! The sensor is supported in NXT-G, Lejos, NXC, and RobotC. The sensor communicates with the NXT via I2C and can be placed on any port. Included in the dLight System: One dLight Adapter (for connecting to the NXT), three dLight Satellites, and three connecting cables. 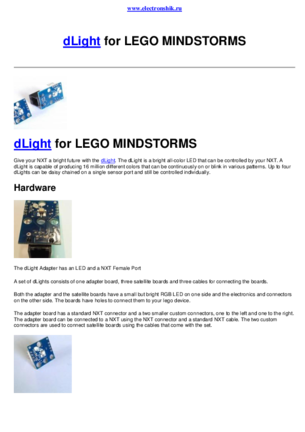 Информация
BrickPi for LEGO Mindstorms and the Raspberry Pi (DEXTER)