Описание:
The PIC10F2XX Universal Programmer Adapter provides PIC10F socket support for both the SOT-23 and DIP-8 packages. It allows interfacing to Microchip's low cost family of programmers inclusive of; PICkit1, ICD2, PICstart, and the BFMP

FREE Adapter downloads to help you build your own system below 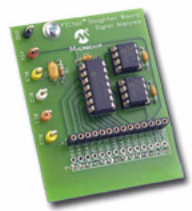 Описание:
The Graphics Display Truly 3.2” 240x320 Board is a demonstration board for evaluating Microchip’s graphic display solution and graphics library for 16- and 32-bit microcontrollers. It is an expansion board compatible with the PIC24FJ256DA210 Development Board (DM240312), and Graphics LCD Controller PICtail™ Plus SSD1926 Board (AC164127-5). 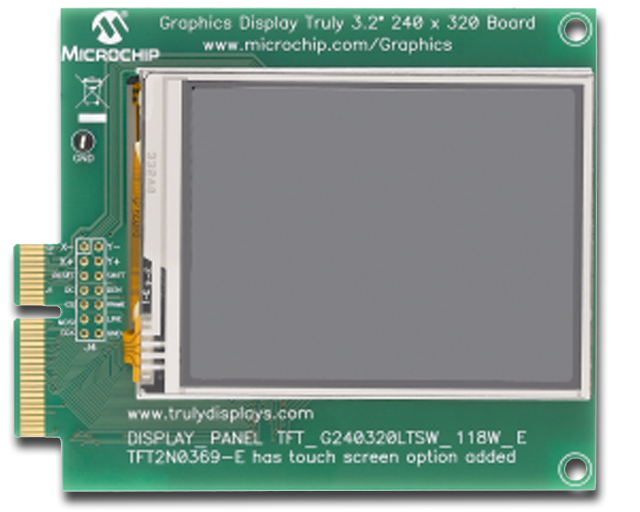 Описание:
The Graphics LCD Controller PICtail™ Plus SSD1926 Board is a demonstration board for evaluating Microchip Technology’s graphic display solution and graphics library for 16- and 32-bit microcontrollers. It is an expansion board compatible with the Explorer 16 development board (DM240001) or one of the PIC32 Starter Boards (DM320001, DM320003). The controller board has a connection for the display boards, such as the Graphics Display Truly 3.2 240x320 Board (AC164127-4). 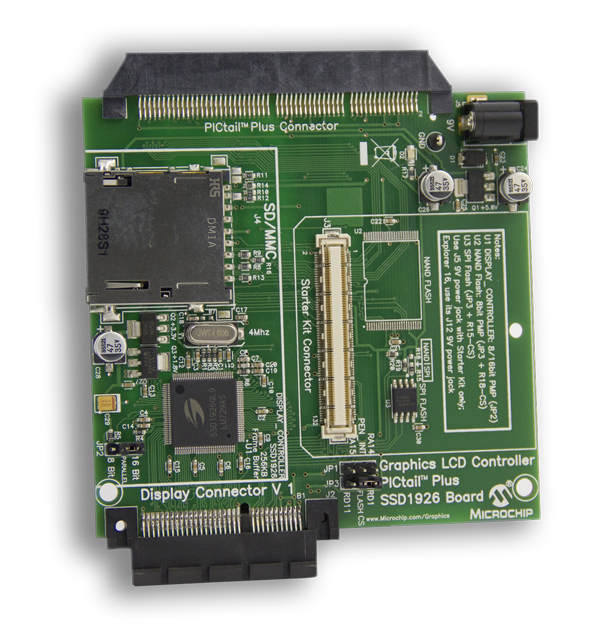 Описание:
The PIC-IoT WG Development Board combines a powerful PIC24FJ128GA705 MCU, an ATECC608A CryptoAuthentication™ secure element IC and the fully-certified ATWINC1510 Wi-Fi® network controller - which provides the most simple and effective way to connect your embedded application to the Google Cloud IoT Core. The board also includes an on-board debugger, and requires no external hardware to program and debug the MCU.

Out of the box, the MCU comes preloaded with firmware that enables you to quickly connect and send data to the Google Cloud Platform using the on-board temperature and light sensors. Once you are ready to build your own custom design, you can easily generate code using the free software libraries in MPLAB Code Configurator (MCC).

The PIC-IoT WG Board is supported by MPLAB® X IDE. 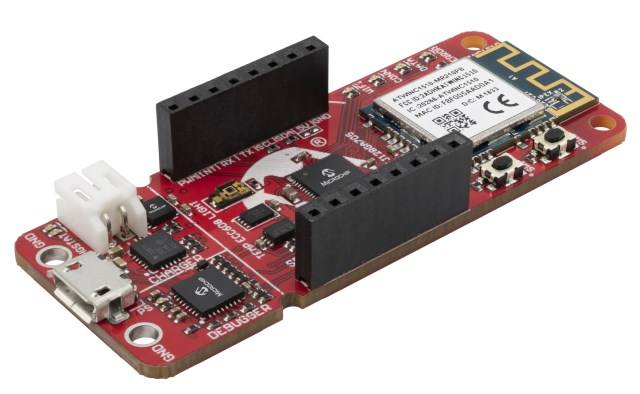 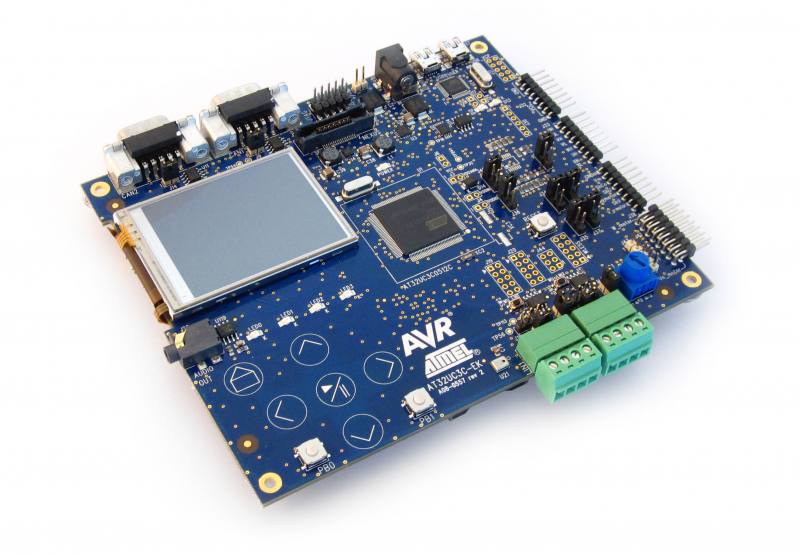 The CAN bootloader lets designers program the different memories and registers of any AT91SAM product with CAN without removing them from the system and without the need for pre-programmed applications.

The CAN bootloader lets designers program the different memories and registers of any AT91SAM product with CAN without removing them from the system and without the need for pre-programmed applications.

This kit lets designers quickly evaluate and develop code for applications running on an SAM7S microcontroller. 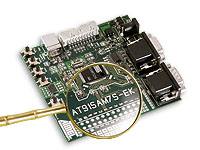 The ISP is designed for field upgrades of existing products using the AVR architecture and based on STK500 hardware and software. The tool supports all ISP AVR devices. The AVR Studio online-help contains the most current information and a complete list of supported devices.

This product is no longer available for sale. For a replacement, see the Atmel-ICE: ATATMEL-ICE 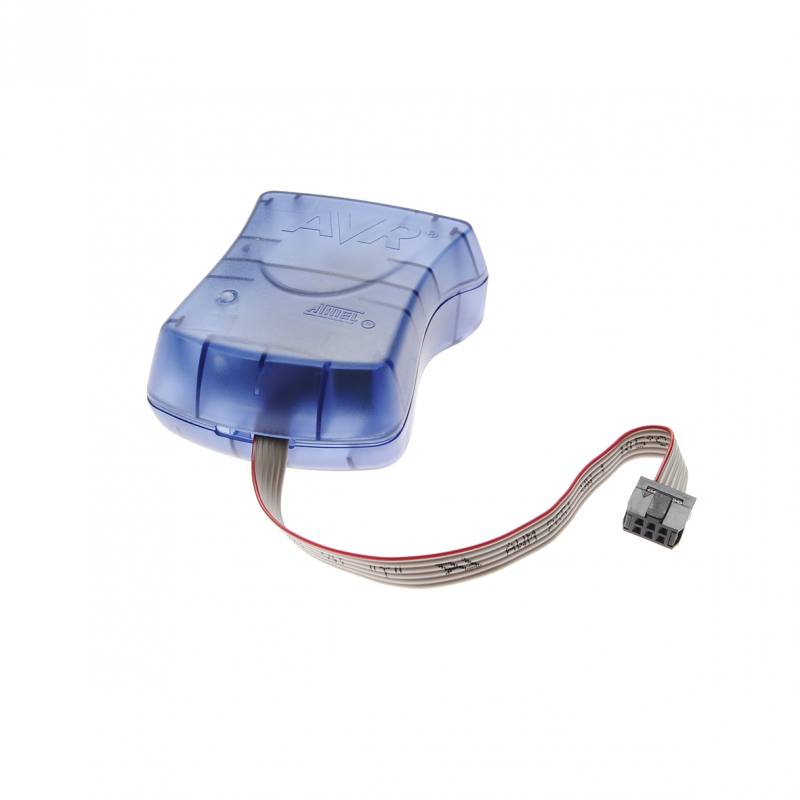 A mid-range development tool for 8-bit and 32-bit AVR devices with on-chip debugging for source level symbolic debugging, NanoTrace (if supported by the device) and device programming. It supports SP, JTAG, PDI, and aWire modes and interface debugging. The tool is firmware upgradeable to support future AVR devices. 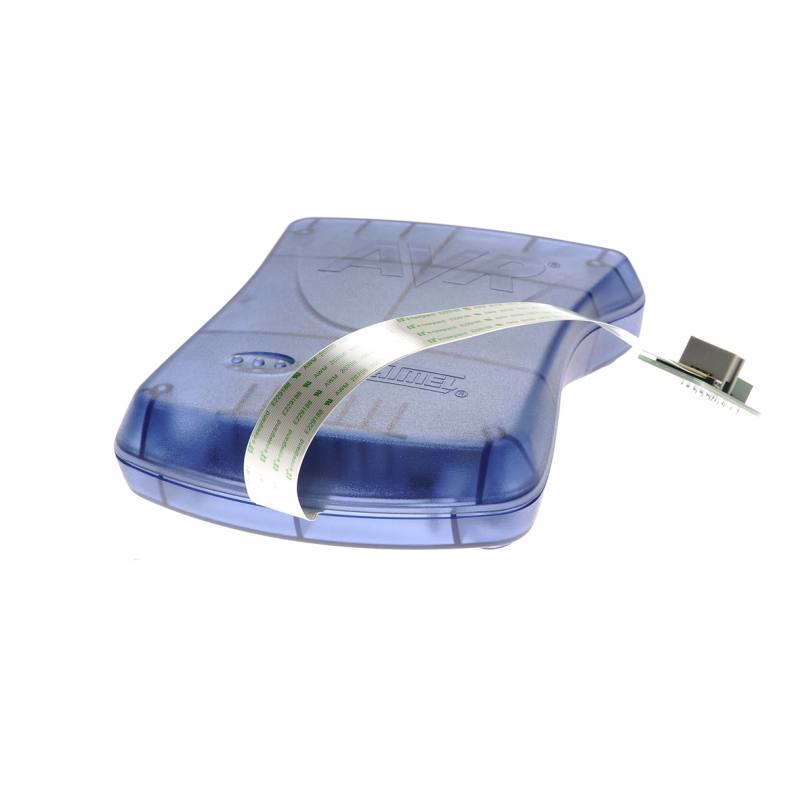 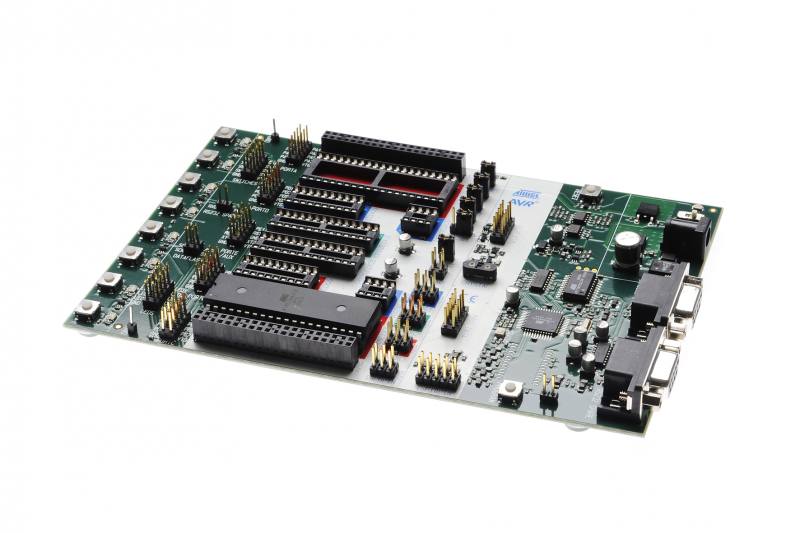 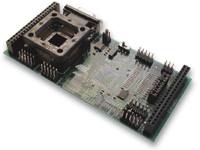 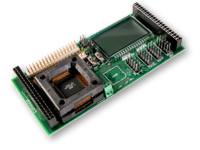 The C51ASM assembler is a two-pass macro assembler for the AT89 Family of 8051 microcontrollers with specific features for the AT89LP single-cycle devices. C51ASM is installed as a part of the AT89LP Developer Studio. It is also available separately for the Microsoft Windows and Linux platforms. Release Notes (V1.2) - Support added for the following devices: AT89LP3240 AT89LP51RB2 AT89LP51RC2 AT89LP51RD2 AT89LP51IC2 AT89LP51ID2 AT89LP51ED2 AT89LP51 - Improved handling of address overlaps during code generation

Описание:
The Maxim Command Module (CMAXQUSB) receives commands from an IBM PC through the USB to create an SPI™ or SMBus™/I²C-compatible interface. Maxim evaluation kits (EV kits) that make use of the CMAXQUSB require custom software and can be ordered together as an evaluation system (EV system). Ordering information for EV systems is included in the EV kit's corresponding data sheet.

An EV system is an EV kit combined with an interface board such as a CMAXQUSB and custom software. Refer to the appropriate EV kit data sheet for quick start and detailed operating instructions.

The use of the CMAXQUSB as a MAXQ2000 development target is not supported. Rather, use the MAXQ2000 EV kit (available at www.maximintegrated.com/MAXQ2000-KIT) for this purpose.

The DM080101 Water Tolerant Touch Surface development kit enables easy evaluation of the 2D Touch Surface library. The kit demonstrates water tolerance and noise immunity on a touch pad and has two touch buttons, all controlled by the same MCU. 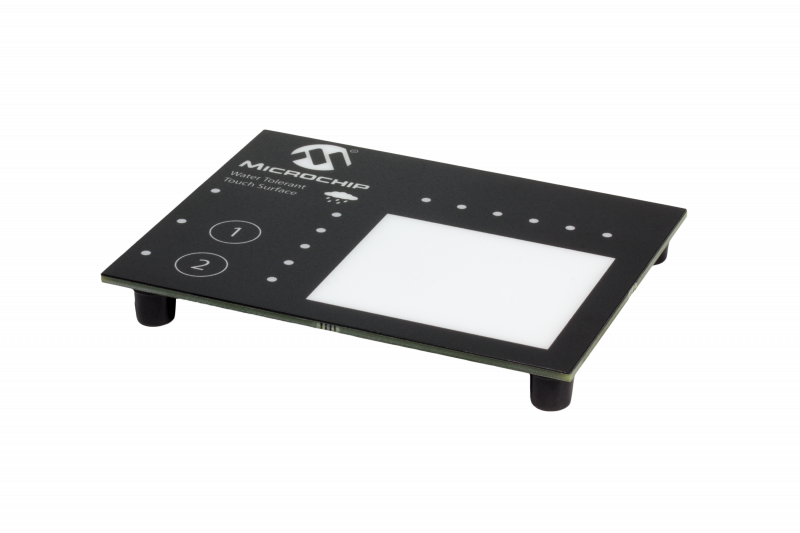 
Please be aware of the sister kit (DM080101) offering the same functionality and form factor, running the 2D Touch surface library on a ATtiny1617. 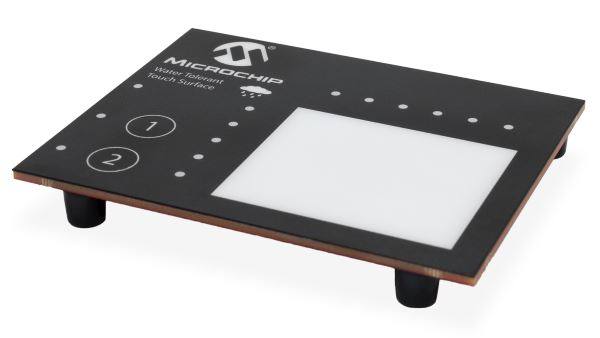 PRO MATE II software is an integrated component of MPLAB IDE. Firmware updates, if available will be listed below, but typically, the latest firmware must be used only with the latest version of MPLAB IDE.

IMPORTANT: PICSTART Plus units with hardware revision of R20 or later already have this feature and do not require this kit.

The PICkit™ 1 Flash Starter Kit is a low-cost development kit with an easy-to-use interface for programming Microchip’s 8-/14-pin Flash family of microcontrollers. This starter kit is designed to help you get up to speed quickly using PIC® microcontrollers.
The kit provides everything needed to program, evaluate and develop applications using Microchip’s powerful 8-/14-pin Flash family of microcontrollers. Instructions are provided in a series of seven tutorials that cover I/O, Interrupts, A/D Converters, Comparators, Data Tables and Timers. All source code files for the tutorials are furnished.

Important Note for Windows 98 1st Edition Users:
These applications are NOT compatible with Windows 98 1st edition. DO NOT INSTALL THIS SOFTWARE ON WINDOWS 98 1ST EDITION.
Возможности:

Описание:
The rfPIC Development Kit 1 provides design engineers with an easy way to evaluate unidirectional remote sense and control wireless links based on the rfPIC12F675 and rfRXD0420/0920 devices. The kit is based on the popular PICkit™ 1 FLASH Starter Kit and consists of modular building blocks for different transmitters and receivers that can be utilized for prototype systems or to evaluate different options using Microchip products.
Возможности:

Описание:
Not recommended for new designs and does not support new devices. To be discontinued. Please see the PICkit 3 Starter Kit: DV164130.

The PICkit 2 Starter Kit contains a PICkit 2 Microcontroller Programmer and a PICkit 2 Low Pin Count Demo Board containing a PIC16F690 PDIP for getting started with programming baseline and midrange flash microcontrollers. PICkit 2 takes advantage of Microchips Full-Speed USB device, thereby significantly speeding up development programming. The PICkit 2 Low Pin Count Demo Board supports 8-, 14-, and 20-pin PICmicros. In addition to the PIC16F690, the board comes with 4 LEDs, a pushbutton, and a pot. Also included are 12 lessons to help get developers up to speed quickly on programming PICmicro MCUs
Возможности:

Not recommended for new designs and does not support new devices. To be discontinued. Please see the PICkit 3 Starter Kit: DV164130.

Описание:
MPLAB REAL ICE In-Circuit Emulator System is Microchip’s next generation high speed emulator for Microchip Flash DSC® and MCU devices. It debugs and programs PIC® and dsPIC® Flash microcontrollers with the easy-to-use but powerful graphical user interface of the MPLAB Integrated Development Environment (IDE), included with each kit.
The MPLAB REAL ICE probe is connected to the design engineer's PC using a high-speed USB 2.0 interface and is connected to the target with either a connector compatible with the popular MPLAB ICD 2 system (RJ11) or with the new high speed, noise tolerant, low voltage differential signal (LVDS) interconnection (CAT5).

Device Support List
The MPLAB REAL ICE is capable of supporting most flash PIC microcontroller and dsPIC digital signal controllers. Check the release notes with the most current MPLAB IDE to see the full list of devices supported.

Other families and more devices will be added in future releases of MPLAB IDE. 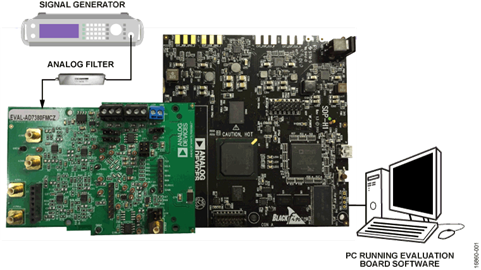 The QuickStart and QuickStart Plus Kits for the ADuC702x Precision Analog Microcontrollers feature debug via UART and an assembly & C-source debugging environment. In addition the QuickStart Plus Kit allows true non-intrusive JTAG emulation. You may who already have this emulator if you have evaluated other ADuC parts from Analog Devices. These kits are intended for any new users who want to have a comprehensive hardware development environment.

It can be ordered separately.

It can be ordered separately.

Development systems for evaluation of the following products:


ADI also provides a non-intrusive emulation POD called the USB-EA-CONVZ allowing assembly & C-source debugging. The QuickStart Plus includes the POD (USB-EA-CONVZ) or it can be ordered separately.

Описание:
The MAXQ2000 evaluation kit (EV kit) is a proven platform to conveniently evaluate the capabilities of the MAXQ2000 low-power LCD microcontroller. The kit contains the MAXQ2000 with pins brought out to headers, a JTAG programming interface, fixed and adjustable power supplies, a DB-9 serial connector, an LCD display, and switches and LEDs to control and display board operation. With the included software, serial-to-JTAG interface board, and an RS-232 cable connected to a personal computer, the kit provides a completely functional system ideal for evaluating the capabilities of the MAXQ2000. 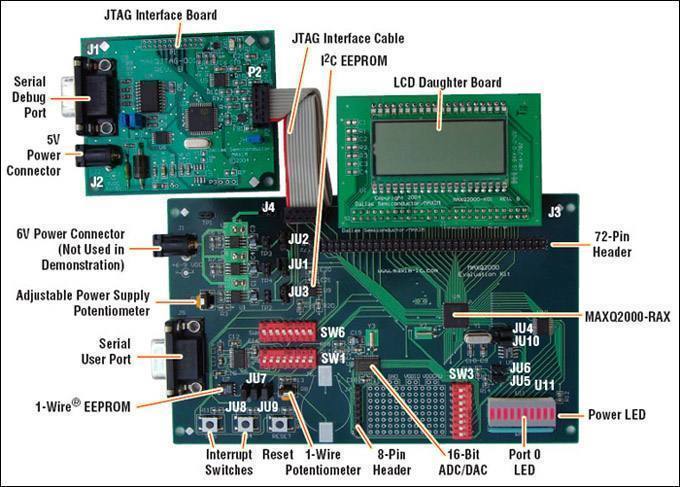 MSP430-CCRFLCD is development board with CC430F5137IRGZ microcontroller from Texas Instruments. This ultra-low-power microcontroller has integrated CC1101 RF transceiver. The board has also LCD, two status leds, two user buttons and UEXT, which canbe modified as device or host.

MSP430-CCRFLCD can communicate with other boards with integrated CC1101 RF transceiver via radio connection. 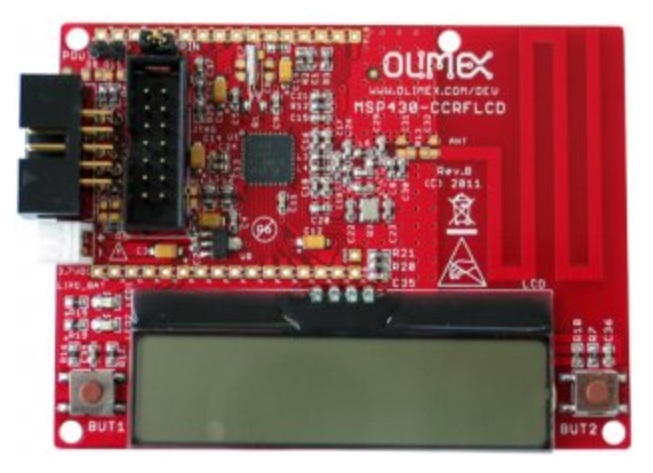 RN1810 Wi-Fi PICtail/PICtail Plus Daughter Board

Описание:
Based on Microchip's new low power IEEE 802.11b/g/n Wi-Fi module the RN1810, the RN1810 PICtail™/ PICtail Plus Daughter Board allows customers to easily develop Wi-Fi applications using Microchip’s 8, 16 and 32-bit PIC® microcontrollers. The kit includes a fully integrated TCP/IP stack allowing for a simple serial to Wi-Fi connection to the microcontroller. The board features a USB interface for easy plug-and-play development with a PC. The board is also compatible with the Explorer 16 Development Board (DM240001), PICDEM.net2 Development Board (DM163024) and PIC32 Starter Kit (DM320001) with I/O Expansion Board (DM320002). 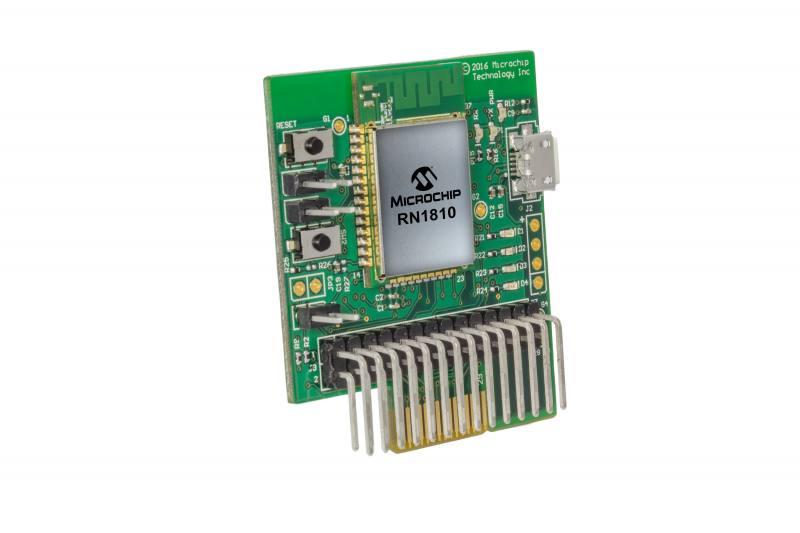 The Raisonance REva Starter Kits are complete, low-cost solutions for starting application development and evaluating the features of STMicroelectonics ARMВ® Cortexв„ў-M3, ARM966Eв„ў and ARM7TDMIв„ў core-based microcontrollers. Kits come with all the hardware and software that developers need to start developing applications, including the

The REva starter kits are available for a full range of 32-bit and 8-bit microcontrollers.

For more information, refer to the microcontrollers support site on www.st.com.

For more information and downloads visit the WIZnet page. 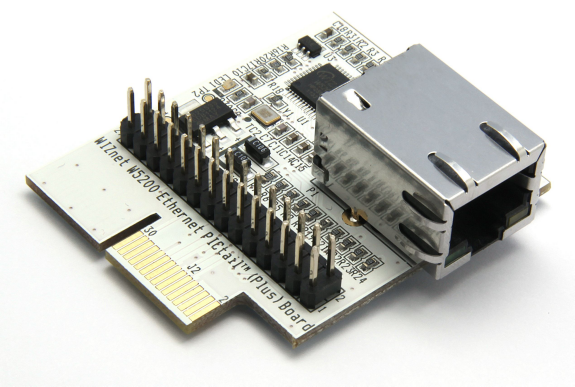